by Darren Pace for BarGlobeWorld.com

For many years, a globe cabinet for liquor has been a popular way to store and serve various alcoholic beverages. In fact, some of these special cabinets are hundreds of years old and of museum quality. These cabinets actually originated back in the 17th century and men would come together around these lovely cabinets and talk of all their adventures in various places around the world. While it’s tough to find the original drink cabinets and you probably won’t want to pay the price for a museum quality globe liquor cabinet if you found one, there are many beautiful reproductions available for purchase. Here is a look at a few of the top reasons to purchase one of these beautiful cabinets for your own home.

Reason #1 – A Beautiful Addition to Your Décor

One of the main reasons to purchase a globe liquor cabinet is because they make a beautiful addition to your decor.

With beautiful wood construction and the lovely globe that they have on the top, they look elegant and beautiful within your home. You can find them in a variety of different types of wood and with different finishes as well, which makes it easy to find a globe cabinet that will fit into your style of decor.

Another great reason to go with a lovely globe liquor cabinet is the wonderful way that the bar rotates for easy serving. Inside of the globe, there is a bar that rotates and you can store your stemware and your spirits inside. This makes it easy to pour and serve up drinks for yourself and any guests that you may have in your home at the time.

Reason #3 – Chill Your Beverages Too

You’ll also find that a nice globe cabinet will even chill your beverages for you as well. This means you can store your favorite spirits inside of the bar and they’ll be chilled and ready for serving when you are ready to serve. This makes the globes more than just a serving area, but a great place to store things as well.

Many of these globe options, even the floor-standing bar globes, are easily portable as well. Some have furniture roller bottoms on them so you can move the globes from place to place. This means that wherever you want to serve up drinks, you can easily move this bar along with you, offering great convenience to you when you are entertaining guests.

A nice globe liquor cabinet will also provide a great conversation starter when you have guests in your home. Since it is such a beautiful piece, your guests are sure to admire this piece of furniture when they see it. The globe often gets people talking about their own adventures that they have gone on in the world, which is sure to get an interesting conversation going.

If you’re thinking of buying a nautical bar globe, there are some things that you should be aware of. I’ll talk about these aspect later.

Even though there is no such official classification, I like to group antique reproduction globe bars and world globes into 4 category types: terrestrial (also called earth globes or geographical globes), celestial (also astronomical globes or armillary spheres), nautical (also maritime globes) and decorative.

Terrestrial globe bars display a map Earth or other planetary body and relate to the planet’s topography. Celestial ones show the heavens and the positions of the stars in the sky (they do not include the sun, moon or planets because the positions of these bodies vary relative to those of the stars). Nautical bar globes depict the seas and oceans. And the purpose of decorative globe drinks cabinets is self-explanatory – to look pretty.

This post covers antique reproduction nautical bar cabinets and not those with a current nautical chart. One of the differences between a vintage replica nautical globe liquor cabinet and a terrestrial bar globe (a difference that many would consider to be a favorable one) is that the map on a nautical one can be more pleasing to look at, particularly for children, because it often portrays sea monsters, zodiac signs and other drawings that are not found on earth globes. (Yes, children can have bar globes too, there’s nothing stopping you from filling a globe bar cabinet with soda, water or other non-alcoholic drinks!)

A nautical drinks cabinet is also a wonderful gift for boaters, sailors, and anyone who is a lover of the water. It can also be a godsend when trying to find a gift for a maritime memorabilia collector who has his or her share of the usual nautical gifts: anchors, steering wheels and model ships. 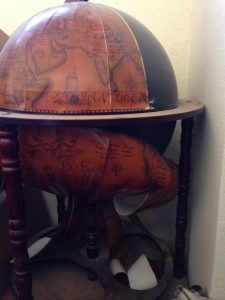 One thing not many people know is that nautical globe bars are almost always made in China, as opposed to their Italian counterparts. Zoffoli is actually the only Italian manufacturer still in business that makes bar globes, and all of theirs, even the modern ones, have terrestrial maps.

Italian globe bar furniture is made by hand and the maps are carefully reproduced by qualified cartographers. This is not the case with nautical bar globes. The quality of the mass-produced Chinese globe bars is often sub-par. Since bar globes can open to reveal a storage area for liquor and stemware inside, the map on the sphere has a seam running along the middle, of course. In my experience the biggest complaint by customers who purchase nautical globe bars is that when the globe sphere is closed the northern and southern hemispheres often do not line up.

So if you are considering the purchase of a world globe bar cabinet, know that “nautical bar globe” is another way of saying “bar globe made in China.”